(According to the editor, this photo will be on the cover if the slide scans well enough.)

My client Dave Cole had never flyfished for redfish on the Lower Laguna Madre, and had come down from north Texas to see what it was all about. After catching his first two reds from tailing pods in a west-side lagoon, I suggested that we go elsewhere. He must have been a bit worried that we were committing the fundamental error of leaving fish to find them. But I could see that the action was falling off, and another place called to me. 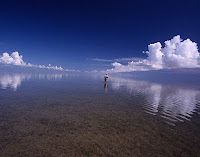 A calm morning is a rare thing on the Lower Laguna Madre of deep south Texas, but during the summer and fall––between the fierce winds of March and April, and the disruptive cold fronts of late Autumn––mornings often dawn breathless on the shallow estuary. At daybreak on a calm morning, sight casting can be superb just about any place you go. Most of my guide friends head to the west side of the lagoon, into the seagrass meadows of such storied places as Paytons, Cullens, and Rattlesnake––bays named, respectively, for a local angling family, a wealthy Houstonian, and our indigenous pit vipers. In these fertile places, the reds will tail in earnest in a foot of water or less as they root head-down through the shoalgrass for shrimp and baby blue crabs.

It's hard to improve on the heart-stopping sight of waving tails spread across a west-side lagoon on the Laguna Madre. But experience has taught me that there can be something even better if I'm willing to go in search of it on the east side. I know that beyond the sheer chaos of mullet and sheepshead that congregate on the east side sand, above-average redfish in small pods can be found feeding even further east in otherwise empty water.