Flyfishing Before the Cold Front 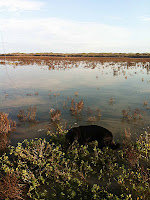 I went down to Kingfisher Inn and spent the night with Rosie, so I'd be there early for the windless dawn that was forecast. My brother Chip came down at dawn and joined me on the water. We knew we had only a few hours before the cold front would blow us off the water, but until then it was calm and moist from the showers that were blessing us with a bit of precip after months of very little.

We took the Stilt out and headed for a lagoon where we usually fish in the 'deep' sections that are only 1 foot deep in the highest of tides. We are fortunate that the Stilt can go there just about any time. Chip was driving, and asked me, "How far back can we go?" I kept waving for him to continue, because there's an area that looks almost dry in the far back end of the remote lagoon, where reds will venture into 5-7 inches of water looking for baitfish. We stopped the boat about 200 yards from the edge of the glasswort sprigs, and waded slowly into the glassy water. Reds were tailing near the boat, and I should have hooked a couple, but my casts always fell to the wrong side, apparently, because none of them reacted. I could have stayed there targeting the tails, but the sounds of exploding reds distracted me from an eventual sure thing. Rosie had been waiting patiently aboard the boat, so I called her and she eagerly jumped in the foot-deep water and took up her position just behind me. We waded slowly toward the shoreline, and registered the location of several actively feeding reds. Approaching the edge of the sprigs, I spotted my first snaking redfish coming up the edge, and casted the pink VIP just off to the side of the sauntering red. It turned and inhaled it and made a blistering run toward deeper water while I tried to clear the line from the vegetation at my feet. As I fought the red, another blew up about 40 feet away, and started showing himself as he swam through the sprigs, his back showing every once in a while, and staying almost visible as I held my Nikon trying to capture him with video while the hooked red pulled my left arm around and pinned it against my side. I wished for a third hand.

The action continued for a while. Chip, meanwhile, was fishing to my left along the sprigs, and said several times, "They are up in no water! I don't know how I could land one if even I hooked it." So he stayed put, hoping they would come to him. I didn't care much about landing the fish, only hooking them, so as soon as I landed the 26 inch red, I headed further in, scanning carefully for the reds that would remain almost invisible before exploding like cherry bombs (remember those?) and sending rain minnows airborne in all directions. I only landed two, but managed to cast to several others. In such shallow conditions, it's very hard to get the fish to see the fly without spooking them at the same time. In fine Sparrow tradition, Chip and I punctuated the morning stillness with expletives that would have made Nixon turn red. It was tense and very challenging, the kind of morning that will make you a better angler if you can keep yourself from imploding. I did, but an observer within earshot may have thought otherwise.
at November 27, 2011