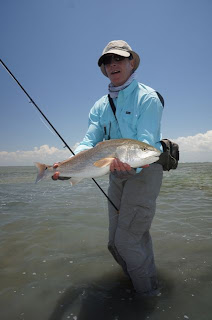 Last weekend, Julie and I went up to Rockport for the NewWater Owners' Tournament. I love the event, because I get to see several old friends, and hang out with people who love fine boats and quality sight casting. I'd never fished the tournament before, because I didn't know the area. But this year, I put out feelers for someone willing to have me tag along, and Tim Clancey surprised me by inviting me to join him and his son Tyler.

After giving a presentation on Friday pm at the "Meet the Pros" event, Julie and I had dinner with my old friend Skipper Ray and his buddy Larry from Laguna Vista. It was great to catch up with one of my favorite people in all the world. But knowing that I had to get up at 4 am to meet Tim and Tyler, J. and I excused ourselves and returned to the Lighthouse Inn for four fitful hours of sleep. 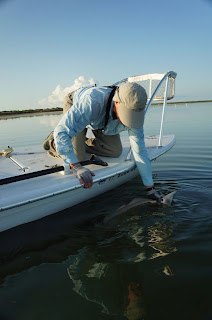 If Tim didn't make the greatest boats of all time, he's probably be known as one of the best guides of all time. He's hardcore. We left the dock at the Copano Causeway and headed east and north in the dark. Tyler used the Q-beam to show Tim the landmarks that only a man who has grown up in the area would know. I do quite a bit of boating in the dark, but I have to admit, I was ready for impact at any minute--with oysters or something more ominous. But Tim took us through a maze of oyster beds and pilings until -- almost an hour later -- we arrived at one of the prettiest lagoons I've ever fished. He had to shoot across some shallow water, of course, to access it, but once we were in, we had a hundred acres of clear, grass-filled water to explore. Tim gave me some directions for targeting trout in the area, and I gladly waded off in search of cynoscion nebulosis -- the starry nebulae, as the trout has been named.

I won't go through a blow by blow, because that's not why you're reading this posting. Suffice to say that luck was on my side, and I ended up claiming the first place prizes for largest trout and redfish, and the Grand Slam in the fly fishing division. It all seemed like luck to me, but I believe that once you're accustomed to fly fishing, it never feels as hard as other people make it seem. 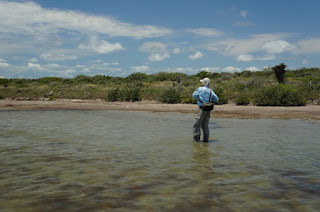 This past weekend, I guided old clients Ted Shuck and his brother-in-law Bill. We had a promising weather forecast--low winds and full fun--but the moon tuned out to be the spoiler. Indeed, the moon was half way to full, which means that the tides fluctuate very little, causing only slight water flow. Under these conditions of low water movement, the fish don't feed as readily. Wow, was that ever true! 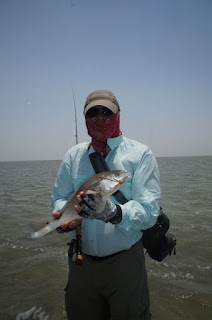 We entered one of my favorite lagoons, and moved a ton of redfish. A guide was ahead of me, but I didn't care: there were plenty of fish for everyone. But after a  few minutes, I realized that the fish were in a stupor. They weren't tailing, and they weren't moving. After an hour and a half of poling through a pile of fish only to catch just one, I pulled the plug and headed elsewhere. For over nine hours, I searched high and low for catchable fish, and found only a few. I think we ended the day with a couple of fish only.

I told the guys, "A guide's nightmare is not a bad weather day, it's a good weather day in which he cannot find fish." The second day was a repeat of the first, except that we went north at first to find birding. It wasn't "on." Thereafter, we tried several things with limited success until we ended up on the sand in the early afternoon. I didn't have much hope for anything more than a few shots, but moments after stopping the boat, a big red calmly swam by before anyone could cast. We proceeded to wade west toward the grass, and began to see a passable number of single reds cruising from southwest to northeast, coming onto the sand. Ted caught a very nice red, and Bill began to get shot after shot while I walked with him, helping him to spot the reds.  I think Ted caught three at that spot, and Bill had a lesson that was not only valuable but exciting. There's no way to get better at this game than to fail over and over until you get your cast, and you get over your excitement enough to make it count. His commitment paid off the next day, which was a poor day as it turned out. High winds came up, and the fish never made it onto the sand, but the guys caught a few reds, and seemed happy at the end of three tough days during which the moon ruled.