Fishermen often ask me where I've been fishing.  I always answer with conviction that finding fish has little to do with "where," and more to do with "when" and "why." The fish move from place to place based on tidal flow, depth, and, of course, the availability of food sources. Knowing when these factors converge in a particular area is far more important than knowing where the fish were yesterday. But then again, a place will hold fish day after day if the conditions are right...and if anglers and boats don't destroy the peace that sustains their presence. 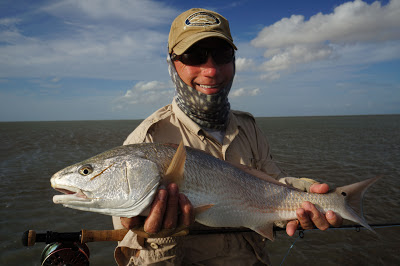 For about a month now, the fish have been in a particular shallow venue that is so hard to access that even the Stilt can barely float when it comes off plane. Given the extreme shallowness, I have to make sure the fish are present before coming off of plane, because it will take me a good hour and 1000 calories to push the Stilt back into water deep enough for a hole shot.

If there is one fly fishing secret that was more precious than any other, I would say that it's about this one area on the Lower Laguna. Only a couple of people know about it -- Randy, a buddy from Austin, and that's about it. I would tell you, but you probably wouldn't believe it, nor have a boat that would take you there.

When Doug Daman arrived last Thursday, it was after almost cancelling his three-day visit due to wind forecasts of 15-25 knots without any slowdown during the night. Indeed, small craft advisories were forecast for Sunday, and with a skiff that weighs only 475 pounds without the motor, the Stilt qualifies for an extremely small craft! We conferred on Wednesday by email before he left Austin, and decided that we'd go ahead and do our best, hoping for birding to save us from a blow-out.

I picked Doug up on the dock before daybreak on Friday, and headed for our best birding area. There wasn't a boat in the entire back lagoon, and the birds were working over large pods of reds. Doug was able to land six reds and a trout before the action subsided. Then I headed south to check out a westside venue that held an abundance of redfish only a week before. But the tides had fallen, and except for a few shots in deeper areas on the edge of the back lagoon, there was nothing to be caught there. The wind was above 15 knots, and we needed the sunlight before heading for the secret place. The time was ripe, so I cranked up and headed the 10 miles or so before arriving in six inches of water. Running the Stilt slowly through the vast area, I started seeing large reds blowing up. I took a deep breath and came off plane, bouncing along the sand as the motor died. We were going to be there for a while. With only Doug and myself aboard, I found I could pole the Stilt, so we stayed aboard the boat for 100 yards or more, until it became clear that the area was full of feeding reds. Doug got off and waded toward even shallower water, since we could see reds blowing up and feeding in critically shallow water.

Afraid that an outgoing tide would strand us in the shallows, I pushed the boat into deeper water while Doug fished so we'd be able to leave whenever the action was over. But it only got better. Doug had almost constant action for about five hours. When I finally poled the boat down to him, I could see redfish feeding everywhere--some quite large--filling in behind him as he stalked other fish. It was as good as I've seen it in a good while. I believe he landed 13 reds before we headed in. If you'd seen the weather and felt the wind, you would have sworn he would have caught none. Indeed, we didn't see a single boat anywhere. We had it to ourselves while everyone else had "wisely" stayed home.

Doug had come down with a friend, who had stayed landside the first day due to stomach problems. But on the second day, Jason joined us. He had never fly fished before, and opted to fish with his casting rod the first day. As you know, fly fishing isn't easy anywhere, but on the Lower Laguna, it's especially punishing for beginners, who face the daunting task of casting fairly long distances in windy conditions, and having to manage their line in the meantime. So Jason stuck with conventional tackle for the first part of the day, since it was his first time fishing for redfish. 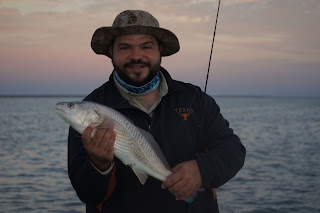 After landing two or three reds apiece, Jason put his conventional tackle away and picked up the fly rod. For the next two days, he stuck with it and by the end of the third day, he declared that he was "hooked."

Instead of fooling around exploring elsewhere, we went directly to the secret place, and spent the next 8-9 hours stalking reds in ankle deep water. There weren't as many reds as there were the previous day, but there were enough to keep the guys on their feet til 4:30 when I finally pulled the plug.

We found birding action at daybreak again on the third morning. Jason still hadn't caught his first redfish on a fly, so while Doug slipped overboard and waded to nearby pods, I poled Jason toward the largest group of reds in the area. It took him a while to hook up on his first redfish, but after two missed strikes, he finally hooked a red on his Kingfisher spoon and brought it to the boat. Meanwhile, Doug was almost constantly hooked up 100 yards from the boat. It was a great start to another fabulous day. We headed again for the secret place and found that the reds were there; but the guys had to go in early, so we spent less than an hour in the area before heading in.

In three days, we saw fewer than six boats. The weather was, by objective standards, rather poor for fly fishing. But we managed to find birding and feeding reds in ankle deep, clear water. That combination usually trumps the problems caused by high winds. While most of the fly fishing community was at home watching football games, Doug and Jason were enjoying "storybook" by fishing on the mother lagoon. You learn so much more about the bay and about yourself as an angler and a person when you have to fish in difficult conditions. However, few people will do it, so they never know what they don't know, and can go all their lives blithely unaware that there are secret places that produce on the most difficult of days. Like life.