Back on the Water After A Month of Rain 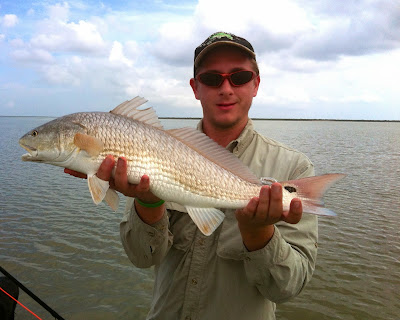 For the past month, we have experienced almost continual rain and clouds due to three separate tropical depressions. This time of year, most hurricanes that begin in the Atlantic do not reach us. However, the storms that spring up in the Caribbean or especially in the Bay of Campeche, which is just above the Yucatán Peninsula, can catch us almost unawares. Indeed only 40 years ago when my father would fish the Mexican beach south of the border, storms would come up quickly and surprise anglers were camping and fishing the surf. On one occasion, my dad was camping with several friends in a large tent about 100 yards from the edge of the water, when they were suddenly awakened in the middle of the night by a large wave that hit the tent and flooded the interior. They  jumped into their four-wheel drive vehicle and drove it as far as they could up into the dunes where they spent the next six hours or so weathering hurricane force winds. That was back before we had the luxury of satellite coverage of approaching hurricanes.  In addition to the immediate wind and rain from a tropical system, we also experience a significant surge in title levels whether the storm reaches us not. Indeed, a storm that reaches the Gulf even as far east as the Florida peninsula will nonetheless push water westward until we experience a significant bump in the normal tides. So, the usual stable weather of late summer can turn into constant rain and wind and high tides, which of course ruins the fishing. But this last weekend, my son Ryan and I went out fishing in order to scout the situation prior to several charters that I have in October and beyond. We found the bay in its pristine condition, having returned to its seasonal title levels, which are still quite high, but nonetheless fishable. We fished in only two venues, and found reds in both places. Ryan who has just moved back from Virginia, and is excited to be flyfishing  again, did quite well on his first outing out. In fact, he caught more reds than I did! We found tailing reds in a westside lagoon that was also festooned with tailing Sheepshead. Interestingly, the sheepshead were quite willing to take a fly. I hooked two big ones there, and landed one. Meanwhile, Ryan landed a very fine red, which he released before I could photograph it. We headed further north into another Westside lagoon that fishes well in sunny conditions. The big reds were feeding on baitfish along a grass free shoreline, chasing bait into the shallowest water. The reds would appear with their backs on the water, giving us breathtaking opportunities to cast a big fish in very, very skinny conditions. I headed in one direction, and suggested that Ryan go in the other direction due to the wind and the fact that he was right-handed. The area that I fished was full of big reds met were feeding explosively, but disappearing just as soon as they would strike. I found it hard to see them, and to cast to them. Ryan, on the other hand, headed in a direction where the water was clearer and even shallower. They were there with their backs out of the water, and Ryan had almost constant action until he landed a 27-inch red.  Not wanting to be left out of the action, I headed over to join him and waded parallel to him, fishing even shallower water up against the shoreline. The reds were still there feeding aggressively an almost impossibly shallow conditions. We didn't catch a lot of fish, but the ones we caught were big ones. The wind and clouds came up in the late morning, so we decided to pack it in.

This weekend, I guide my old client Howard Miller from Dallas, who has rescheduled three times in the last six weeks due to weather. The forecast says that he should have ideal conditions. Beyond Howard's weekend charter, I have several others lined up, and I hope  that the tropical storms have finally run their course. We really needed the rain, and we got plenty of it. But now, it's time to catch a few fish.
at October 02, 2013