Flyfishing in the Age of the Corona Virus

The weekend forecast predicted a decent Saturday, and a rainy Sunday. Having been housebound from the corona virus for the better part of two weeks, I knew I could use a day on the water. The stay-at-home restrictions allowed for some outdoor activities, but it wasn't clear if driving from McAllen to our trailer in Arroyo City to go fishing was permitted. Ryan said he'd heard that it was permitted, but a good night's sleep is hard to beat, so I elected to stay home and sleep in late on Saturday morning. Julie and I walked Rosie down the greenway at 9 am, and I sent a text to Henry Bone from Austin, who had texted midweek with a vague suggestion that we might do some fly fishing, but our communications went dark after the forecast predicted a piss-poor weather weekend. Henry did indicate, however, that he might come for Sunday through Wednesday. So halfway through our walk, I texted him, "Are you coming down?" To my surprise, he responded with, "I'm in West Dunkins..." That is, he was on the bay! This was the second time in a little over a month that Henry had come down from Austin trailering his own boat, after our plans had fizzled! I got on the phone and called Ryan. Two hours later, we were heading out to fish the Sand with Henry.

But whoa, let me confess to my earlier ass-dragging episode in February, when Henry and I planned to fish on a weekend. At the last minute, I consulted Weather Underground, and I determined that the forecast called for rain, most likely. I suggested we call it off, and Henry agreed. But come Saturday morning as I walked with Rosie and Julie along the greenway in McAllen under a cloudless sky, the imprecision of the forecast became clear. So I texted Henry to confess: "I screwed up. I'm sorry." To which Henry replied, "I'm here. I came down and I'm at the launch."

Stirred to life by the prospect of fly fishing for big trout under a cloudless sky,  I roused Ryan from his usual Saturday am slumber, and suggested we go out for big trout. He was up and on his way before I could leave the house.

Actually, the day turned out to be nearly perfect--full sun, low wind, and super low tides. Ryan and I headed for an area known for hosting giant trout in the winter--South Cullens Bay, and found Henry fishing along the channel spoils. He'd already caught a couple of tailing reds, so we decided to try something else--to go further west, and see if we could find the monster trout. Coming off plane in a foot of clear water, I poled Ryan toward the west shoreline. After seeing several reds and big trout, and spooking them from the boat, we finally staked the boat and prepared to wade wet in the chilly water. I texted Henry and informed him that we'd seen big trout, but then turned my attention to the task at hand.

Wading slowly away from the Stilt, I began to spot big trout, cruising slowly or parked in the middle of "potholes," where a big trout can hunt effectively by hugging the bottom of the grass-free area, waiting for a hapless piggy perch whose time has come. 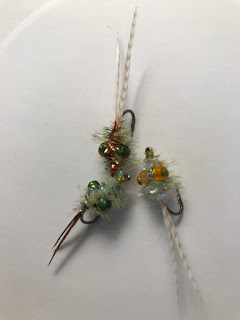 I was amazed that I was able to spot several trout in the six- to eight-pound range, and get good casts to two or three before a pair approached from the north. In the glare, all I could see were the black tips of the tails of two trout. Casting my size 8 Mother's Day Fly, one of the trout seized the fly without hesitation. I didn't realize the fish was so big, but fortunately, I yielded to her initial run and managed to keep the fish on the line. Twenty minutes later, fighting the big trout gently and slowly so as not to tire her, I lifted her out of the water briefly to measure her--a solid 29 inches, and probably about 8 pounds. She was in her pre-spawn splendor--fat and healthy and full of color. 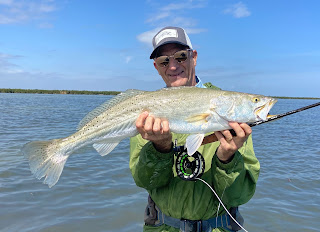 Ryan came over the took a couple of pictures before I released her. I texted Henry, and urged him to come over. A few minutes later, he arrived and joined us wading slowly in the knee-deep clear water. Later, when he joined us at the boat, he had stories to tell--of hooking a giant trout briefly, and having several shots. Ryan, too, was wide-eyed and energized by the close encounters that he'd had while wading toward the mangrove-covered shoreline of South Cullens Bay.

The next day, my brother Chip joined Ryan and me, while Henry took his boat out, too. Needless to say, we headed south again, and after a 40-minute run in the chilly morning air, we were soon wading in south Cullens, hoping to find the giant trout, once again. Alas, the tide was just turning when we arrived, so the trout had not arrived in the shallow water of South Cullens. However, we found tailing reds spread out in the glassy water, and managed to land a couple before relocating to the east in slightly deeper water, thinking that the trout would be in the deeper water, but starting to head our way. Sure enough, Ryan, Chip and I all had head-to-head encounters with 8+ pound trout that were heading west into shallower water. Chip had three strikes on a sparsely tied (by me) Dahlberg Diver from the "largest trout I've seen in years," he said. Ryan was stalking a tailing red when I saw a huge trout heading his way. I called to him, and at first he seemed annoyed that I would interrupt his stealthy approach to the visible redfish. But I yelled to him, "This is a rare opportunity. Get ready." A huge wake bore down on Ryan, and he made the cast, only to have the fish reject the fly. Very typical for big trout! Before we headed in, I, too, had my mano-a-mano encounter with a 7-9 lb trout, only to have it disappear after my fly landed "perfectly," or so I thought. 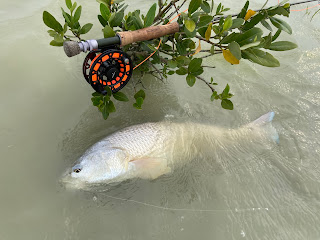 Fast forward to last Saturday, when Henry roused me from my homebound status once again. Two hours after discovering that Henry had come down from Austin, we joined him in our Stilt and headed east to the Sand. Henry had been down south, and had already landed six reds in one of our favorite west-side venues. They's been tailing pods earlier in the day.

Under a full sun, Ryan and I headed for the "shelf" which is the far east side of the LLM, where the water suddenly become a foot shallower. I didn't see anything on my first wade, but Ryan had three shots, as it turned out.  As I walked back to the Stilt, Henry came up from the south and parked alongside our boat. I joined him and shared one of our Lone Stars with him, as we watched Ryan stalking reds 200 yards away. 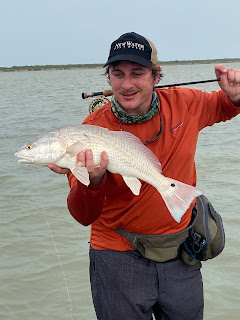 Henry had been out longer than we had, so he headed in, while we opted to our favorite late afternoon venue. Last year, I caught a 33" red there just at sundown, and I hoped we'd see pods of oversized reds pouring into the area before dark. Sure enough, single terns and gulls were working over a large area, so we waded toward them to see what they'd found. My first shot reaped a hookup with a 29" red. Ryan, meanwhile, had waded to the north, and I couldn't get him on the phone to tell him that reds were suddenly appearing under birds as far as I could see to the south. I stopped fishing after landing the big red, hoping that Ryan would eventually join me. Finally, I reached him by phone, and said, "Come here now!" Half an hour later, Ryan was stalking tailing pods that were spread out in the off-color water, working under Forester terns and Laughing Gulls. After he's landed his red, we headed back to the boat to celebrate a wonderful afternoon.

EFFECTIVE AND POWERFUL LOVE SPELL CASTER DR JUMBA
I have been rejected by my husband after three(3) years of marriage just because another woman had a spell on him and he left me and the kid to suffer. one day when i was reading through the web, i saw a post on how this spell caster on this address (wiccalovespelltools@gmail.com) have help a woman to get back her husband and i gave him a reply to his address and he told me that a woman had a spell on my husband and he told me that he will help me and after 2 days that i will have my husband back. I believed him and today I am glad to let you all know that this spell caster has the power to bring lovers back. because i am now happy with my husband. Thanks for Dr jumba. Reach him on WhatsApp Number: +19085174108 or wiccalovespelltools@yahoo.com Thank you Dr jumba. May your gods always reward you for your good.