I have to admit that I have enjoyed fishing in a few catch-and-release tournaments over the past 20 years. I have spent most of my on-the-water time poling clients, and helping them catch trout and redfish, so flyfishing for fun is rare, and flyfishing competitively is even less common in my life. Indeed, I don't really like to compete with friends and families when we are fishing for fun.

At this point in my life,  I thought that I would perhaps help Ryan and his buddies do well in tournament opportunities that might arise in the next years, either as a non-fishing guide or consultant. But Ryan made his best pitch for us fishing the invitational La Mosca tournament together, which will be held on Nov. 7-8. I finally consented, and then we were surprised and pleased to find out that our good friend Henry Bone of Austin was interested in joining us. Henry was one of my first clients, has become a special friend over the years, and stars in two of my favorite YouTube flyfishing videos. Henry is a master saltwater flyfisher.

The last time I flyfished a tournament with Ryan, it was 2001, and he was 12 years old, and had barely begun to flyfish. 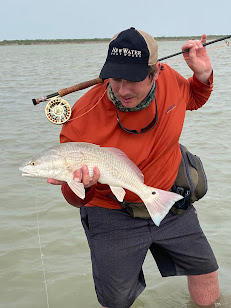 That was the morning that I was stung by a sting ray before the sun rose. The stinger almost passed through the narrow area in front of the Achilles tendon, but stopped just short of breaking the skin on the other side. I grimaced through the next four hours until the pain stopped, not realizing that wading with the open wound invited a life threatening infection of vibrio vulnificus. As one reader once told me, "The thing that impresses me about your story the most is how stupid you were!" Indeed. But it made for a pretty good story. I've written about the ordeal in Healing the Fisher King: A Flyfisher's Grail Quest.

That memorable event has not not deterred me from flyfishing in a couple of tournaments since; but Ryan and I have never flyfished a tournament since that day, even though we were hoping to fish the TIFT together this year before it was cancelled. Ryan, Henry, and I are getting pretty psyched up about joining forces, and I know it's going to be a blast.

The La Mosca Tournament's entry fees will benefit Flatsworthy, the organization that supports fishing ethics and conservation on the flats.