Failure and Success in the Cruelest Month

T.S. Eliot wrote, "April is the cruelest month, breeding. Lilacs out of the dead land, mixing." Indeed it is for flyfishers on the Lower Laguna, because April's easy success can quickly turn to failure, mixing. During the last two weekends, my clients and I have seen the true beginning of the season, along with the successes and failures that attend the cruelest month.

On April 11, Julie and Rosie and I headed for our place in Arroyo City and, after putting the Stilt in the water, decided to take an evening boat ride to the bay. We customarily make a beeline for the sand that late in the day, because the reds are often streaming upwind in bootie deep water. It's about the only dependable action that one can find late in the day, unless the birding is "on." We didn't have time to check out the birding venues, so the sand was the only conceivable venue where I'd have a chance to catch a late-day redfish. We shut down in about 10 inches of water at about 6:40 pm. Since the sun was already low to the horizon, I grabbed my 6-weight and began wading east with Rose at my side. Julie uncapped a beer and began enjoying one of her favorite places in all of the world. She is always happy to be there. 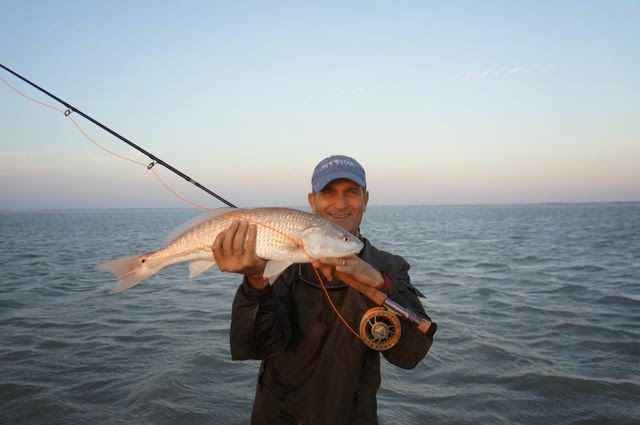 Once Rosie and I reached "the shelf," where the depth goes from about 8 inches to 3 inches, I turned downwind and watched for reds feeding upwind. Almost immediately, I spotted one traveling towards us, pushing water against the wind-driven chop. He was easy to see even while submerged, but his back would break the surface every few feet in the six-inch water. I casted a chartreuse Crimp to him, and it landed about four feet away from him. I wasn't surprised to see him swerve to intercept it,  even in such shallow conditions, because the reds in this venue during the late afternoon are very aggressive and willing to take a fly. He hit it once and missed. I casted again, and he hit it two more times without hooking up, then blew up and headed to deeper water.

The next two reds appeared at intervals of about 5-10 minutes, so the action was steady but not overwhelming. They were equally aggressive, and I ended up landing them both--26" and 25" fish. I lead the second one back to the boat where Julie took a photo of us before we called it a day.

This may sound like "easy fishing," and it was; but only if you have the eyes for it. It takes a while to adjust to the late afternoon, windy conditions before you can perceive reds feeding upwind; but once you get the visual signature, it's fairly easy to capitalize on this reliable action. I have found the reds predictably feeding in this venue just about any evening at any time of the year. It's a great option for late evening anglers.

Feeling confident that the reds might be there in the morning, I nonetheless headed to a birding venue to rule out that relatively easy, seasonal option. We ran several miles through the usual birding areas, and then headed east to check out the action I'd found the evening before.

My clients and I ended up within a hundred yards or so of where Julie and I had parked the evening before. I waded with them over to the shelf, and then had them turn downwind and spread out about 40 yards apart from each other and walk slowly downwind. When the reds are in this venue, they typically travel quickly upwind, feeding as they go. So you really don't need to cover much ground. Sure enough, after a few minutes, I spotted the first incoming redfish nearly 80 yards away. Even in the 15-mph wind, it was easy to see because of the "interference pattern" created by the redfish swimming against the wind-dirven chop. My client Rodney Hurtt was, at first, unable to see the push; but he became progressively able to spot the fish at increasing distances. By the time we left the area, he could see incoming fish at 80-100 away, too.

Rodney and his buddy Larry had several close-in opportunities to catch big reds, but it wasn't in the cards. They'd grabbed rods off of their friend's boat that were totally new to them, and it was difficult to  cast the unfamiliar rods in the windy conditions. Nonetheless, they had several "stress tests" that were precipitated by buck-fever like cardiac activation. Indeed, there's nothing like a redfish heading straight toward you with its back out of the water to test your heart's health. There was one moment when about six reds approached in the six-inch water, driving wakes toward us. They ended up exploding within 20 feet of us and zipping away. It was exciting action.

We didn't catch any fish that day, but got into some sand action later once the sun came out. But the sun was a fickle partner on both days, and given the wind, we just didn't have ideal conditions for sand action.

We had fewer opportunities the second day when I had Rodney and his brother Gregg on my boat. We tried for birding action, but after running most of the distance of the west bay, I gave up and headed east again.  I was chagrined to learn later that I'd given up on birding too soon, and that Randy had gone just a half mile further and found pods under birds. I kicked myself around for that mistake, even though it's what I call "playing the results." In tournament bridge, we review the hands after the play and often discover that there are ways to have done better. But such retrospective analyses benefit from omniscience. Neither angling nor life in general affords us such a vantage point, so kicking ourselves around because we didn't know something at the time is a uniquely human pastime that is predicated on error. All you have to do is to watch Fox News or CNN to see how retrospective analyses lead us to blame people unjustifiably for things they could not have known beforehand. As someone once said, Most conspiracies are nothing more than an attempt to cover one's ass once a mistake is discovered. 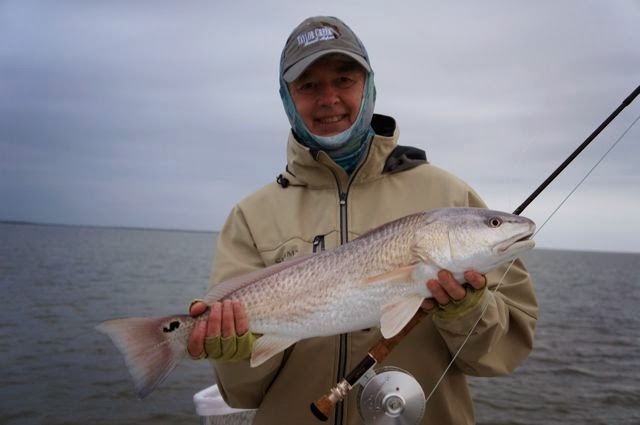 After we found the sand devoid of reds, I got a call from Randy informing me of my error, so we headed back west and got into a single pod of fish with a dozen gulls overhead. Ironically, the pod was comprised largely of catfish, and Gregg managed to land the only fish of the day after casting fruitlessly to the pod--a 12-inch hardhead. It was a pretty discouraging day after that, even though the sand was clear enough to offer success. However, the fish were not on the sand; so we ran around and ended up empty handed.

This past weekend was a completely different story, even though both days featured 15-20+ mph winds. I guided Walter Weathers from Houston, who was alone on my boat for two days. We found big reds under birds on both mornings, and reds on the sand after midday on both afternoons. Walter landed 4 reds over 25 inches the first day, and six reds the second day (five of which were 24+). It was a very good weekend during a time of the year when success can be as fleeting as lilacs rising from the dull roots, as Greg and Rodney discovered the week before.