Flyfishing on the Farquhar atoll, in the Seychelles

This blog entry is kicking my butt. I couldn't get it to format correctly with photos interspersed, so I'm writing above the photos, adding to it from time to time, summarizing my recollections. -- GSS

For my own benefit, and for the benefit of my friends, I want to spend some time recollecting the week that I spent flyfishing in the Seychelles this past October. It was an amazing experience that I'll probably never have again this lifetime. And if only for the reason that I do not want the memories to fade away, I will take some time bringing them to life in words. 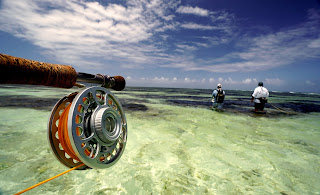 Flyfishing is a specific method, but the range of flyfishing venues is vast. A flyfisher can be an accomplished angler in one setting and a rank amateur in another. But then again, amateur is the conjoining of two words, "lover" and "truth," so a great angler doesn't necessarily mind being brought to his knees if the result is to learn something new about the world and about himself. 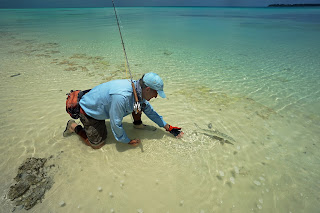 Bobby McConal and I had no idea really about the demands of Farquhar. I think we both expected it to be an easier fishery than it turned out to be. But it wasn't just another "pretty face" among tropical flyfishing settings that one easily forgets on the journey to the next frontier. It was, at once, a stunningly beautiful and harsh ecosystem defined by five-foot tides, treacherous coral heads, intimidating surf, high winds, big seas, and other intimidating features that framed a paradisical lagoon that is so far removed from the rest of the world that only 40 people live there year round, subsisting for the most part on the harvest of coconuts. 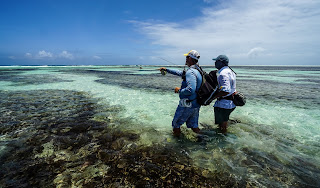 To get to the middle of nowhere, we flew from Houston to Dubai, waited 8 hours, then flew to Mahe (the "big island" in the Seychelles), and spent the night in a hotel with the rest of our 10-man group. We were nine time zones from home, and still not fishing! We were delayed the next day when the plane that usually flew to the atoll once a week was grounded. Fortunately, the Seychelles air force provided us with two planes that flew our group the final 2 1/2 hours to the meager landing strip on Farquhar. As we made our final approach in gusty, windy conditions, the little plane caught a cross wind at the last moment, and veered sideways before the pilot abruptly pulled it back up and then set it down safely. I thought, "To have come so far only to fish, and then to die on this tiny runway would be the ultimate irony." Shaking off the anxiety, I stepped out of the plane only to be greeted by our very white and very black South African and native guides who had lined up to shake our hands. Then we piled into a cart pulled by a tractor and were carried a mile across bumpy terrain through coconut groves to the lodge on the north shore of the atoll. (More to follow) 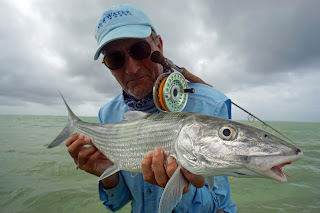 Second entry:
Bobby and I were so beat from the trip that we went to bed about 8 pm while the rest of the guys--most from south Africa, stayed up doing what guys do away from home--drinking and telling stories. The sounds of their laugher weren't enough to keep me up, however. I awoke at 5:30 and immediately listened for the wind. It was howling.
We headed east from the lodge, across a choppy expanse, toward the leeward side of the atoll, and then south toward a flat that was downwind from the crashing surf. Bobby had forgotten his raincoat, and by the time we had reached the calmer water, he was drenched. It was a strange sight to see huge breakers only a couple of hundred yards away as we anchored the boat in four-feet water. The tide was dropping, and we couldn't anchor in shallower water; for if we did, we could face a beached boat only an hour or two later. We jumped into the water, and held our cameras above our heads as we tiptoed to shallower water. 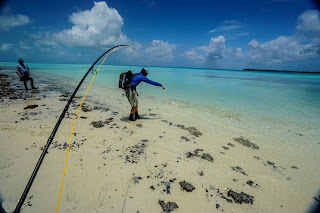 Looking back, it may have been the best day we had in terms of opportunities. The low tide was midday, and moving quickly to the evening, and by the time the week was over, we were limited to incoming tides and deep-water venues, and shorelines.

The main goal for fly fishers in the Seychelles is to catch giant trevally. We'd been told that the previous week's group had landed over 30 GTs, so the chances were good that we'd score a GT. But they were suddenly nowhere to be found. On the first day, I managed to hook one briefly from the bow of the boat, only to lose it. 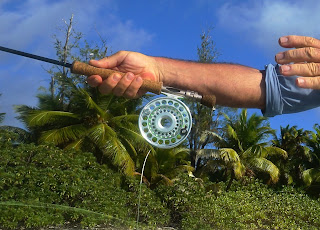 Nick was quick to point out my error--that is, to lift my rod. I was a bit annoyed, because I knew I'd hooked it before lifting the rod. But Nick clarified by saying that you should never lift your rod, but rather to crank down on the fish, and to keep the rod low. The fish have such hard mouths that we were supposed to keep the rod low and apply maximum pressure. Oh, well, I thought...I'll do it right next time. And next time never came. Why, you might ask (as I did)? Because, as it turned out, there was a "hatch" of small swimming crabs offshore, and the GTs has abandoned the atoll to feed on the crabs. Our buddies, who fished offshore with conventional tackle caught 145 GTs during the week. That's where they were. We'd traveled 10,000 miles to catch one, and they moved a few miles to deep water. Pretty ironic, huh? Nick had us stay close as we stalked a group of 40-60 lbbumpy-head parrot fish that spooked on the first cast. Then we waded a shallow "tabletop" flat where we spotted some parrot fish, and a couple of giant trevallys passing through beyond our casting range. 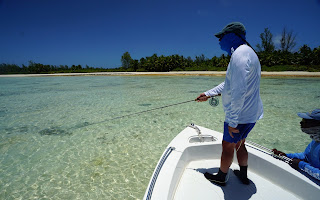 We carried 12-wt and 9-wt rods, so that we could cover all the bases. Nick carried whatever we weren't using. Bobby and I were so used to a self-sufficient form of angling that we found it hard to have someone carry our spare rods for us. Indeed, all of the guides carried a sizeable backpack, filled with cameras, food, water and flies, while the clients carried only one rod and our flies.

Third entry--It was a wild place. Imagine a half-moon sliver of sand, coral, lava, and cocoanut trees, separating the crashing surf from a protected lagoon that varies in depth from one foot to 10 feet deep. Coral heads ring the island making the surf extremely treacherous for surfers and boats, and dot the lagoon like cauliflower, making navigation a dangerous proposition. 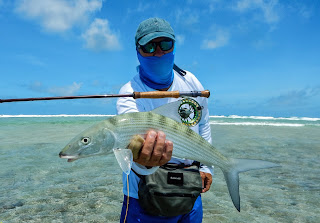 One of most interesting fishing areas is where the surf has broken through the atoll, creating a half-mile passage that you can walk through. On two separate days, our guides Peta and Jason opted to lead us through the passage into the surf where we spent several hours at low tide casting to bonefish, triggers, spangled emperors, and bumpy head parrot fish. What was surprising to me was how shallow the schools of bonefish would go, and yet how difficult they were to see against the mottled bottom and amid the churning water. 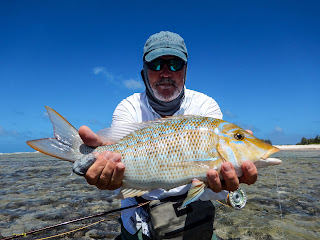 We didn't spot any giant trevally, but were able to land a few bones. Here's a bonefish and a Spangled Emperor that Bobby caught on the surf side.

Thats cool infomration for someone who is bird loving. Thanks for the information and keep posting for beginners