Julie and I drove down to the Arroyo City RV Park, planning to fish on Saturday and Sunday. But after getting settled and launching the Stilt at the private launch, we decided to run out to the bay to enjoy the evening, a time of day characterized by a blessed absence of boats and an abundance of birds. We headed into one of my favorite places to fly fish, and looked for gulls working over redfish. At first the lagoon seemed devoid of gulls, but then I spotted a couple of single gulls working close to the water--a sure sign of redfish, as long as there aren’t any Ibises around. (Gulls will also work over Ibises for the same reason as they hover over reds: The ibises stir up shrimp, and the gulls like to steal them before the birds can seize the prize.)
“Do you want me to catch a red,” I asked Julie. It was a 200-yard wade through murky water to get to the spot where the gulls were hovering, and sting rays are plentiful in the area. I didn’t mention that. J. said, “Sure! I’d like one for dinner.” So I hiked as fast as I could through the muddy, wind-blown water toward two laughing gulls that were working along the edge of shallower water, where I knew the reds would show--backs and tails--even if the birds headed elsewhere. As I got closer, I could see blowups and splashes beneath the birds, and I noticed that the gulls were sliding north along the horizon, indicating that the fish were moving around rather quickly. I waded into the area, and saw that three different groups of redfish were covorting in the shallow water. The were driving waves ahead of them, and their tails and backs were breaking the surface. The water was full of algae, making an unfouled presentation almost impossible: I would have to hit the fish on the head and provoke a strike before the fly picked up the algae. 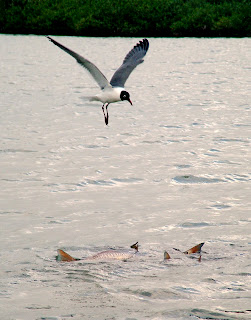 I casted a Mother’s Day fly several times to the largest sweeping group, and drew two quick strikes without hooking up. On the third cast, the fly hit the water just in front of the sweeping wave, and a huge red exploded and chased the fly for about 10 feet before grabbing it and speeding away. As poor luck would have it, some of my fly line clumped into a little ball and jammed in the smaller guides. The big fish was going to break off at any minute, so I dropped my rod, grabbed the rod tip and pulled the mess of line through just in time. Alas, a minute later, the fish--probably 30 inches long--came free. When I reeled in the fly, the hook was bent. I would have never landed him. So I changed flies and put on a Kingfisher spoon.


The fish were now upwind, and the southeast wind was steady at 18 knots. I considered wading around them and casting downwind to them, but that would take a while, and I wasn’t too concerned about catching them. So I stripped out as much line as I could hold out of the water, and approached a group of reds from downwind that were milling around under one gull. A fairly large fish swam away from the group and toward me, so I stopped and waited. Casting upwind as best I could, I dropped the fly too far to the left, then to the right, and then right in front of the fish. It swam up and ate the fly and never stopped. It turned away and shot off with the spoon embedded. 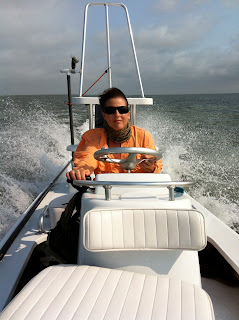 A while later, I landed a 25” red. Leaving the rest of the fish feeding visibly in the shallow water, I escorted the red back to the boat. While I rarely keep fish, Julie wanted to have one for dinner, and so I relented. I eat fish, and it doesn’t make sense to let all the redfish go, and then buy salmon in the grocery store. Also, it keeps me in touch with what it means to be a predator and mortal, and to survive at the expense of other forms of life. It’s humbling, and it’s a good way to stay grounded. 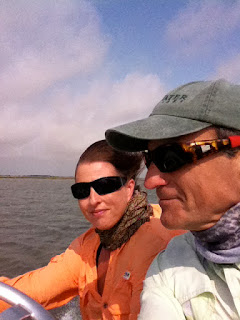 The next day, we went out at about noon. Heading straight to the sand, I stopped at a spoil island north of Green Island so J. could explore while I waded onto the sand just to the east of the spoil island. I hadn’t gone 50 yards before I spotted two reds cruising together. They fought over the Clouser before one won the battle and shot off with the Clouser. Alas, my fly line wrapped around my rod butt, and the fish bent the hook almost straight before coming off. Chastened by my poor line management, I changed flies and continued my eastward wade while J. walked the island, escorted by a hundred gulls interested in having her leave the rookery. I spotted several more reds, and managed to land four before heading back to the Stilt. There was no need to overdo a good thing, and my partner had been patient with me. I knew it was time to sip a beer and have a late lunch aboard the skiff, so I turned back toward the island, 300 yards to the west. It had been a great day, and a beautiful woman was waving at me.
at May 06, 2012