Long Days on the Water, chapter 2 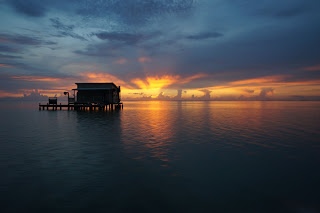 After the Pool group left, I had three days with my old client Doug Gaunt and his buddy Dick from Ft. Worth. Having been on the water the three previous days, I knew what NOT to do, and that's a help. In exploring an area that has been fishing poorly, I stumbled upon a shoreline that was festooned with reds, many of them tailing in pods of 6-15. The productive area was only about 200 yards long, which might explain why other guides had overlooked it. But it was sweet! I didn't go there until mid-morning with Doug and Dick, but the action was still good enough that I thought, "This is the place to come at daybreak." After having a pretty slow first day, I went to the area at first light the next morning and wow, there were some good pods. I was able to video Doug hooking up on three reds, one of which was 27 inches. The pods were very touchy, however, so he'd get one or two casts before they were sweeping toward deeper water. We returned to the shoreline the next morning, and did about as well. Starting off with some success is a great way to take the edge off the day. 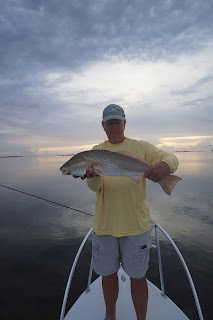 The rest of the LLM fished poorly; that is, we'd find a few shots and catch a couple of fish without ever hitting the motherload. Doug has caught more reds fishing with me than any other client, so he knows how good it can get. In fact, he averages around 15 reds per day, and he and his brother once caught over 50 reds on one summer day.

Still, the guys enjoyed it. Our final afternoon was spent on the "upper sand" where the guys landed three reds before it was time to go in. When you score there, you remember every fish forever, because it's such classic action. For instance, Doug had waded about 400 yards and hadn't seen a red yet. Wading around the backside of one of the islands that divides the sand from the upper sand, he came upon two nice reds with their backs out of the 6-inch water. You'd think the fish would have seen him and fled, but for some reason you can get really close to those fish. He missed his first cast, and spooked them. But they settled down almost immediately, allowing him to present his small Clouser again. He landed a 25" red-the final fish for three days of tough fishing.
at July 23, 2012