Three Days with Tony and Cody 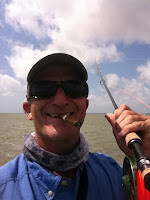 It's especially rewarding to guide someone who has fished all the major venues, and yet sees the unique beauty of the Lower Laguna Madre. Tony Woodward, who has his own veterinary teaching institute in Colorado Springs, doesn't ever seem to get enough of the sightfishing action on the LLM, and has a special fondness, as many of us do, for the "sand." Tony has brought several of his friends down to Arroyo City over the past two years, and most recently--last weekend, in fact--arrived with his friend and colleague Cody, who had fished with me before, too. 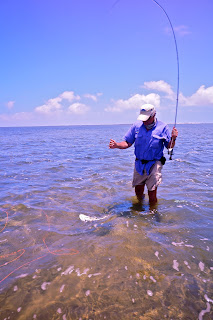 But oh...getting up on Thursday morning was not a pleasant experience. My little trailer at the Arroyo City RV Park had been rocking with the wind all night long. I poked my head out the door, only to have the door blown out of my hand. It was going to be a difficult day. I know, I say the wind is often helpful, especially in the afternoon on the east side sand. But 25-30-knot winds are never helpful, mostly because somewhere above 20 knots, most of the LLM begins to lose its clarity. And since we sight cast, we're screwed until we can find some visible fish somewhere.

Having had to face this scenario countless times, I have learned that there are places and phenomena that one can turn to that may save an otherwise fishless day. Ah, birding--the guide saver on a windy day. Indeed, birding was on my mind when I picked up the guys at the dock and headed down a very choppy Arroyo before sunrise.

Looking back, I should have headed north to a more reliable birding venue, but I decided otherwise, and found some birding in another locale. But it fizzled, and we were left fishless without a plan. I headed north at that point, and we found some action, but came up empty again. Sometimes the reds tail in the wind just to the north of the Mansfield Cut, so I headed there midmorning. It's a risky thing crossing the oysters only to find that the fish aren't there, but the likelihood of finding fish elsewhere had dwindled to near zero according to my usually-optimistic database of experiences. What to do next? I headed farther north, hoping to find some tolerably clear water right up against the Padre Island edge. It's part of the "north country," and often very unpopulated on a week day. We moved some fish in the shallowest water, so I shut down. We waded the edge for several hours, and managed to find a few targets coming upwind with their backs and tails high in the murky water. Tony snagged a couple before landing a nice 26.5 inch red. On such a windy day, the fish seemed like "the bright shad of some immortal dream," or something equally miraculous. So we went home happy. 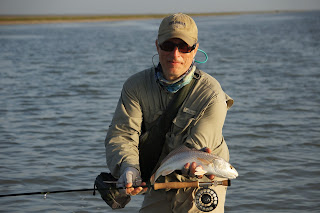 The second day was better than the first, and the third was the best of three. We got into birding early on the second day, and landed a couple before the sun had barely risen. We made the rounds, caught a couple on the sand by midday, and then were hardpressed to find anything else. I suggested we stay out long enough to see if the birds would work. So we waded in the most beautiful area of the LLM--the southeast sand for a couple of hours, only to land a single small red. Then we headed toward the main birding venue, but not before ducking into some of my favorite spots down south, not expecting anything, but not willing to overlook them either. I was daydreaming as we planed north when suddenly I saw birds working ahead of me. Shutting down only 100 yards short of the melee, I was pleasantly surprised to see birds working for the first time in this particular area. It turned out to be more than a fluke. Indeed, birding popped up in several nearby places, and we fished them til the guys were tired. They caught more trout then reds, but they had a great time.

The third day proved to be the best one. Starting on the west side, the guys scored a couple of reds under birds. The sand was stunning by midmorning, so we spent the rest of the day out there. By early afternoon, we were into very good redfish action on the sand where the clear water sparkled like a jewel in the afternoon sun. Both Tony and Cody caught several fish, and remarked that nothing quite compares with sight casting on the sand.
at June 05, 2012