Ryan and I hadn't fly fished since he came to live with me a year ago. That's hard to believe, but whenever I was open, he wasn't free. Finally, last weekend we made it happen. We went to the Arroyo and stayed in our Casita camper at the Arroyo City RV Park. After launching the boat, we took a ride out to the bay to see if birds were working in one of my favorite spots. There were reds in there, but they weren't doing anything.  We decided to take a wade anyway, and then I discovered that I'd left my rods at the trailer. I didn't mind, since I get to fish a lot. I took my camera and walked beside Ryan as we tried to discern signs of redfish among the mullet.

The next morning, we went to the same place, and found reds and ladyfish feeding on the rain minnows and mullet that were thick in the foot-deep water. Just after sunrise, we enjoyed a double hookup on reds. It had been a long time since Ryan had caught a red, so his day was "made" with that single fish. But we weren't ready to go in yet, so we kept fishing. Ryan landed a couple of ladyfish, but the reds became scarce. After a long wade, and some missed strikes, we headed elsewhere. There wasn't much happening, so we decided to go in; but before turning into the Arroyo, I suggested we go north and look for birding, even though it was about noon. The birds don't often work over the reds during the midday, but if the tide is right, they sometimes do.

The only thing I saw as I entered a muddy lagoon was a single gull and two terns working along a shoreline. That was enough to tell me that they were over reds: the gull was dipping in manner that always says to me that they are feeding on shrimp that are fleeing reds or trout.

It was crazy, but I suggested we run down the shoreline in order to intercept the pod of feeding reds. That would have been a decent plan if the bottom hadn't been soft mud. Indeed, when we got out of the boat, we both sank to our knees. But instead of going back, I plowed to the shoreline and dodged mangroves as I made very slow progress. The next time I saw the gull, it further away! Instead of giving up, I poured on the juice, not knowing whether Ryan was behind me or not. Finally, I looped out onto the hard sand, and attacked a high wall of mangroves in an attempt to get to the water. It was stupid. I fell head first into half-dead mangroves, and dropped my rod just in time not to break it. Covered with mud, I got up and plowed the rest of the way through the mangroves until I reached the shoreline. There I saw...absolutely nothing. The gull had disappeared.

I was gasping for air, but finally settled down and waded out onto the muddy soft bottom of the lagoon's shoreline. Ryan finally appeared and began stalking mullet that looked like reds with their backs out of the water. I didn't have the heart to tell him that there were mullet, so I quietly headed back to the boat, and went to pick him up. 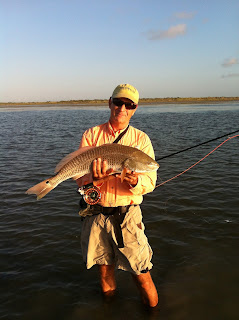 Sitting in the boat, sipping water and letting our evaporating sweat give us a reprieve from the midday heat, I saw birds working again, and coming our way! When I pointed it out, Ryan said, "I'm done. I'm happy. I don't want to ruin a good day!" But I cajoled him until we were both out of the boat again in the soft mud slogging toward the approaching wave of water that bespoke of feeding redfish. As luck would have it, the fish turned toward me, and I put a Mother's Day Fly in front of them only to have them explode and flee. "That's it! I'm really done this time." Ryan was getting a bit peeved. So I went back to the boat with him. However, I looked down the same shoreline and saw another small group of birds diving on fish that were heading our way. "You fish them!" I urged. Ryan first refused, but then seeing that the pod was definitely heading our way, he relented and grabbed his rod. I grabbed my camera rather than being the one who casted to the fish. Just as the pod was about to reach Ryan, the birds peeled off, and the surface signs of approaching fish disappeared. Oh god, he was really pissed now.

I was getting ready to start the boat and...you know what happened. This time I saw a VERY BIG group of birds working about 1/2 mile away. Without asking Ryan what he wanted to do, I got the Stilt up and ran toward them. I shut down 200 yards out. Ryan was quiet. Then he asked, "What are you going to do?" "I'm going to fish them. I assume you don't want to." Again he was quiet. "I'll fish with you," he finally said. "Great!!!" I grabbed my camera, never intending to fish that pod and started giving him instructions that he needed but didn't want. "Don't cast until you can put your fly in the tails, because there's trout and ladyfish around the reds. And don't let them get by you and get upwind of you!" I could see that he was having a hard time taking the advice, so I hoped for the best and quietly followed. The fish were big--the largest tails I've seen in a long while. They were moving away from us, as luck would have it. So Ryan really had to hike through the muddy water to get close enough for a cast. He started too soon, of course, and the reds just kept slipping outside his cast. "You have to catch up with them. Don't cast until you do!" I couldn't help saying that, I was lucky he didn't throw the rod as far as he could and stomp back to the boat. You know, parents often say the obvious.

Anyway, he finally hooked around and got slightly upwind of them, and landed his fly in the tails. He hooked up! Afraid that he would lose the big fish, he took 45 minutes to land him. I was afraid to tell him to put pressure on the fish, because I'd be the one the blame if the fish came loose. So I waited as patiently as I could until Ryan landed the largest redfish he'd ever caught--a 28" fish! Suddenly, I'd never seen him happer. Later he said it had been one of the best days of his life, even though I seem to recall that there were a few rough spots on the way to heaven.
at June 20, 2012