I hadn't planned to fish. My nephew Spencer from Denver and his buddy Micah from Houston had come down for three days of flyfishing with Chip, and a fourth angler on the Stilt can be an official "crowd." But when I tried to turn down the invitation to join them, they made it clear that they wanted me along. "Hell, I've never seen you just fish. You're always guiding," Micah said. So I went down and launched the boat so they guys would be able to hit the water at daybreak after driving from Weslaco. 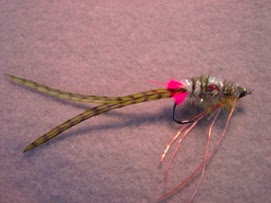 I was elected to drive the Stilt, which was fine with me. We decided to fish south rather than to go north for birding action. When I'm fishing for fun, I usually leave the pods alone, preferring to go after the larger reds in the back lagoons and shorelines. So we headed into the first lagoon south of the Arroyo, and shut down and started wading toward the south shoreline where the water became progressively shallow until it was only bootie deep. There weren't many reds, and when they tailed, it was only briefly. I finally landed one, and headed further west hoping to find the big reds that feed only on finfish along the far west shoreline of this most favorite lagoon. I finally had one shot at an incoming monster, but I blew the cast. 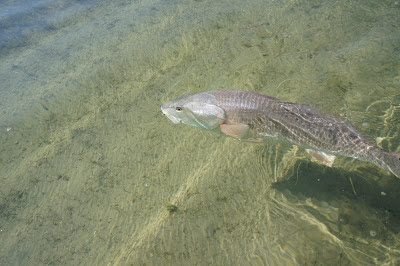 We headed much further south, hoping to find big trout mingled with redfish, and succeeded, even though the sight casting was tough. Staking the boat 300 yards from the west shoreline of south Cullens, we all waded toward the shallower and clearer water along the mangrove-lined ridge that runs north and south. We didn't see much until we were within 100 yards of the shoreline. I spotted a tailing red and caught him, and then saw two larger reds tailing along the shoreline, and landed one of them--a 26-inch fish. I was feeling in the zone. I headed further south, leaving the guys behind me, and noticed that they were starting to make the long wade back to the boat. I fought the inclination to wade back, finally deciding that they could come pick me up. It's hard for me to let others do that after years of doing the "boat chores" as a guide. Looking further south, I saw only clear foot-deep water stretching out for another 600 yards before the shoreline of Stover's point rose abruptly out of the shallow lagoon. Then suddenly, I heard the explosion of a huge redfish or trout. A reddish egret was dancing around the  area, where a large school of mullet was circling slowly in the glassy water. I couldn't see the remnants of the fish's surface break, but I took a bead on the sound and headed slowly toward it.

I was happy that I'd worn my new polaroids. I'd ordered a special pair, and installed side shades that I'd made out of leather. (If you want to order incredibly cheap, high-quality prescription polaroids, go to www.zenni.com. You can get single lens prescription glasses for $45, and progressive trifocals for about $90, depending on the frame.) They broke the glare that normally streams in from the side, and I could see over 60 yards ahead of me. Wading very slowly, I scanned the water for the signs of the mystery fish until I spotted a large pink shape moving slowly from left to right. It turned sideways, and I saw that it was a huge redfish, probably 30 inches or more.

I waded into position, and luckily it turned and headed toward me. Casting my Mother's Day Fly on my TFO six weight, I dropped the fly just beyond and ahead of the fish's head. Not wanting to spook it with an approaching fly, I let it sink and twitched it slowly along the bottom, hoping for the best. The red spotted it after it had passed, and shot forward to inhale it. It was on! But it ran toward me, and the fly popped out. I stripped the slack in, and laid the fly ahead of it as it came within 25 feet. Alas, a mature redfish rarely falls for the same trick twice, and he shrugged off my effort. Turning sideways only 20 feet from me, he stopped and eyed me before lumbering off. I was happy, even though I didn't land him. It was a compliment that he'd accepted my presentation and taken an MDF that I'd tied while watching TV only a few days ago.

We headed onto the sand, which is my favorite place to fish. We put Chip and Micah out, and Spencer and I headed 1/2 mile further north and staked the boat. The conditions were perfect: not a cloud in the sky, and the sun at a slight western angle. Spence and I spotted several reds and a couple of trout before Chip and Micah picked us up. I managed to pick up one red on my MDF before we headed further north. We had intended to head in, but we ran over a passel of reds, and several big trout. So we shut down one last time and slipped overboard. While Spencer and Micah didn't seem much, I found a line where I spotted continuous reds for half an hour. They were spooky given the high-vis conditions, but I managed to hook two before Chip poled up behind us and officially pulled the plug on a perfect day.

You may want to consider this: When I wade fish with others, we all experience different things. I can wade beside someone who doesn't see one fish in an hour, and I can see 30 reds in the same period of time. This may sound like boasting, but I'm just stating the facts. What makes the difference? It has to with three things: experience on the water, stopping, and seeing. Obviously, the more experience on the water you have, the easier your eyes and brain can separate information from the background noise. But beyond sheer hours on the water, you can increase your chances of success by stopping from time to time while you are wading and observing very carefully. If you observe herons, you will see them move forward, then freeze, move forward, then freeze. You can perceive movement when your head is stationary far better than when it is movingl. Also, don't cast unless you see something. If you cast, the movement of your head will keep you from perceiving movement in the water. Further, get the best glasses you can find. Don't scrimp on polaroids. Your vision is the most important ally on the water, and if you scrimp on your eyeware, you won't see half of what's there.
at May 06, 2013